This picture is of a Dor beetle. The Dor beetle is a type of dung beetle under the family of Scarab. It looks very much like the ancient Egyptian symbol for the god Khepri. He was thought to roll the sun across the sky everyday in much the same way as a dung beetle rolls dung. For this reason the dung beetle represented recycling and reincarnation, the sun going each evening and coming back each morning.

I think the dung beetle is a good symbol for recycling and reincarnation anyway, for its use of dung helps return the nutrients  (for there are plenty in dung!) back to the soil for the plants to grow. The Dor beetle is known as an “earth-boring dung beetle”. They usually work in pairs, a male and a female will dig a passage in the earth under a pile of dung. They then dig side passages off of this and into each one a piece of dung is placed. An egg is laid into the dung and the passage is then closed off with more dung. The larvae hatch from the eggs and feed on the dung for a year until they pupate and adult beetles emerge.

I came across this beetle on the body of a recently deceased stag. It is not unusual to find dung beetles on carcasses, the “Beetles that eat bodies” webpage lists them as one of the beetles entomologists look for on cadavers to help determine the time of death. The one I watched was determined to get on the top of the stags shoulder, it kept trying then falling off, then trying again. Whenever it fell off it rolled over onto its body and then I could see its metallic blue and purple underbelly and legs. It really was a very beautiful creature. Unfortunately I did not take a photo so these drawings are done from memory and what I could find on google. The beetle’s determination paid off and eventually he climbed onto the shoulder and, seemingly proud of his accomplishment, strutted across the body.

The Dor Beetle is is also known as the Lousy Watchman because if often has small mites living on its belly. I couldn’t see any mites on the one I saw, this may have spoiled my vision of it as a lucky omen. 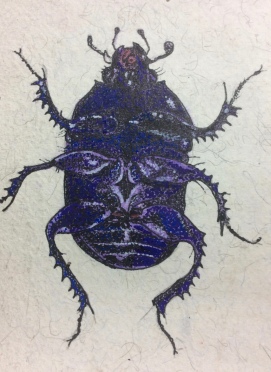